BERGMAN RULED OUT OF MOSCONI CUP AFTER POSITIVE COVID-19 TEST PartyPoker PRESS RELEASE (Nov. 25) — Justin Bergman has been ruled out of the partypoker Mosconi Cup after testing positive for Covid-19. He will be replaced on Team USA by former US Open Champion Corey Deuel, who has provided a negative test result and will represent America for an 11th time at the event.

All players are required to test negative for Covid-19 just before departing for the UK, however Bergman’s test returned a positive result leaving him unable to travel to England.

Captains were asked to submit alternative picks in September, after they had chosen their team of five players. Team USA Captain Jeremy Jones opted for Deuel as his first alternate, hoping that the Californian can draw on his vast partypoker Mosconi Cup experience. Speaking about Bergman being ruled out of the event, Captain Jones said: “It is a big body blow to a small man who has a huge heart. Playing in the Mosconi Cup means more than anything to Justin. He really likes the atmosphere of the team and having the other guys on his side, like most of us do. It is very, very unfortunate and one thing I can say about Justin is he will be our biggest fan out there.

“It wasn’t an easy decision but the way things went down with Chris being selected fifth and being a rookie, we felt like maybe if we needed a player to come in as an alternate we wanted a little more experience. Not to say that Tyler doesn’t have two years’ experience, but Corey has got 10 Mosconi Cups, and I think Corey is playing really well. When we talk about somebody coming in and filling shoes, we felt that experience was the way to go.”

Players will compete in the partypoker Mosconi Cup under Elite Sports Person Exemptions. They will be met on arrival to the UK and driven directly to the Ricoh Arena, Coventry for a further Covid-19 test and will remain within the event bubble until the completion of the event.

Everybody at Matchroom Multi Sport would like to send their best wishes to Justin – stay healthy, and have a speedy recovery.

The partypoker Mosconi Cup will take place from Tuesday, December 1 until Friday, December 4, live on Sky Sports Mix in the UK, DAZN and Matchroom.Live. Full broadcast details can be found at mosconicup.com. Images courtesy MatchRoom. 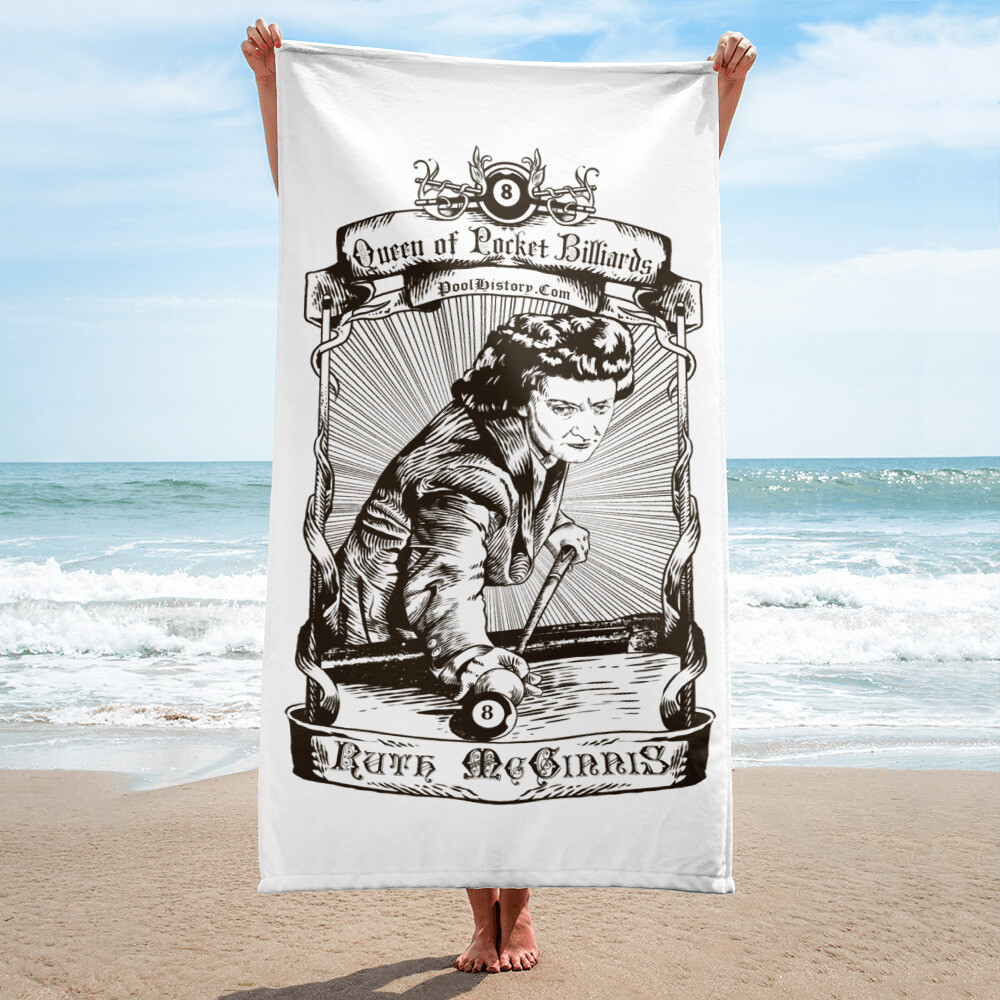 SKU 00006
$35.00
In stock
1
Product Details
Wrap yourself up with Ruth McGinnis, the Queen of Pocket Billiards. This super soft and cozy all-over sublimation towel celebrates this early pioneer of professional women's pool • Available in one size: 30”x60” • 52% cotton, 48% polyester • Made in China. Printed in the USA • Printed on one side only • The non-printed side is made of terry fabric, making the towel more water-absorbent
Save this product for later