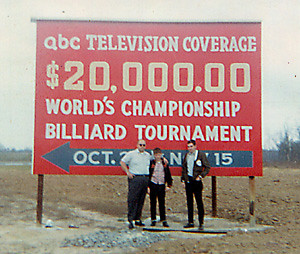 Gary Carlson, a former graduate student from Southern Illinois who wrote recently about a chance encounter he had with Minnesota Fats, also sent in a note about stumbling into a poolroom owned by George and Paulie Jansco. This was sometime back in the late 1960s. The Janscos were the creators of the famous Johnston City tournaments, which I write about in Hustler Days. Carlson appears to have stumbled into a game with Hubert “Daddy Warbucks” Cokes, although his memory is a bit fuzzy on the point. Carlson says the players appeared to be off their game and ended up spending a good part of the evening arguing about the spot. That’s a picture of Daddy Warbucks, below, although he’s standing there next to another young fan (not Carlson). Right above this post I’ve included a picture of the Johnston City sign. Cokes was known for his fondness of one-pocket and firearms.

Prior to the experience with Fats, maybe it was 1965 or 1966, I lived in Decatur, Illinois and was finishing up my bachelor degree in Chemistry at Millikin University. A buddy of mine who I played pool with said we should go down to southern Illinois to watch a major pool tournament. So, we piled into his ’58 Chevy Impala and away we went. I have no idea how he learned of the tournament, but the drive took longer than I had anticipated.

I didn’t know what was going on — I knew nobody and certainly didn’t see nor hear anybody named “Minnesota Fats.” The place was wall-to-wall packed. Difficult to see the action and it seemed somewhat disorganized. After watching endless 9-ball, we learned that the more interesting stuff was going on “out back.” I can’t recall (after all, this was about 45 years ago) if it was in a part of the same room walled off or a small building separate from the main room. I think we paid $5 for entry. It was north of the main building (which was like ‘50’s deco), the latter which sat on the northwest quarter of the intersection. In any case, we were there only maybe a couple hours and the only memory I have was in this back room. Frankly, I wasn’t very impressed with the caliber of play – but what did I know? I thought I saw people just as good back in Decatur. I used to watch Don Tozer play there. Anyway, I recall or heard of or saw “Jersey Red,”Eddie “Knoxville” Taylor, and “Big Daddy Warbucks” who I much later learned was Hubert Cokes. The match I recall was between Big Daddy and somebody else – I can’t recall who – seems like Taylor, but I’m not totally sure if Taylor or Red were even there that year and I just heard their names – but it was certainly Big Daddy. I also remember a LONG conversation about what the handicap would be. The game was going to be 8-ball and a race to something for $100 (good money back then). Now, instead of their bridge hand, Warbucks was to use his hat for a bridge and the other guy went into the toilet and returned with a big toilet brush. As I said, the play was unremarkable. I expected long runs, “magic” shots, etc. I was young.

Now I regret that during 1966-1969 when I was in Carbondale, I never bothered to even go back there to watch again – even though it was just east a few miles. Curiously, I did play in a band and we actually played a couple of gigs there at that location. I’ve forgotten the name of the place. It might have been “Janscos.”