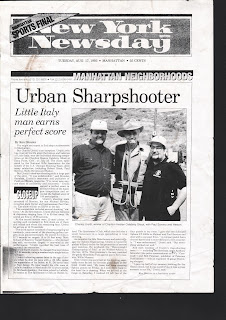 Did you know that Charles Ursitti, recent Hall of Fame inductee and a key figure in the book The Hustler & The Champ, was also a highly competitive sharpshooter? He learned about guns from his father, and then went on to shoot both in public exhibitions and in tournaments.

Charlie was the driving force behind the Great Shoot-Out, the famous 1978 televised match between Minnesota Fats and Willie Mosconi. You can read more about that in The Hustler & The Champ, published by Lyons Press. Charlie also has amassed one of the greatest repositories of historical pool and billiard statistics in America.  You can see those stats online, for free, at charlesursitti.com.

The New York Newsday article shown above describes Ursitti’s victory in the individual shooting competition at the Charlton Heston Celebrity Shoot in California, back in July 1993. That’s Heston himself in the photo, in the middle, and the actor Paul Sorvino on the left. Charlie is pictured at right.

According to the article: “Ursitti’s dead-eye shooting stole a large part of the show. ‘It was unbelievable,’ said Brendan Banahan, Ursitti’s teammate and publisher of Field and Stream magazine. ‘I’d never seen anyone shoot as confidently and accurately.’ Ursitti earned a perfect score in all four events of the handgun competition and recorded the highest score of 100 participants.”Ursitti is to be officially enshrined into the Billiard Congress Hall of Fame during a ceremony in October. Wimpy Lassiter, the late hustler and fellow Hall of Famer who figured prominently in Hustler Days, also was an expert marksman.