Michael Phelan, the Father of American Pool — A Timeline Michael Phelan is considered the father of American pool. He was inducted into the Billiard Congress of America Hall of Fame in 1993. Just below is a timeline that outlines major events in his life.

1819 (April 18th) — Born in Castle Comer, County Kilkenny, Ireland.
1823 — His father John Phelan immigrates to the United States. Here, he begins to operate a number of pool rooms.
1824 — Michael Phelan and family join father John in New York.
1830 — Begins learning the jewelry trade. He eventually abandons this trade and instead follows in his father’s footsteps, devoting himself to the pool business.
1838 — Phelan travels to Galveston, with plans to open a pool room there. The plan goes awry, and Phelan remains stuck and penniless in the south for several years.
1842 — Michael Phelan returns to New York.
1847 — Opens the famous Arcade Billiard Room on Barclay Street, a favorite of the fashionable young men of the day.
1848 —Irish nationalists launch aborted rebellion; Hugh Collender, Phelan’s future business partner, flees Ireland — apparently in a coffin — when the rebellion fails; Phelan lends financial support and helps arm militias in the United States.
1850 —Phelan, seen now as greatest player in the United States, publishes Billiards Without a Master. This was pool’s first best seller.
1851— Phelan visits Europe as a delegate of the “Insurrectionary Party of Ireland,” meets with rebel leaders; is ejected by British authorities.
1851 or 1852 — Leaves New York for California.
1854-1855 — Returns to New York.
1854 — Begins manufacturing billiard tables, entering into a partnership with Hugh Collender to form Phelan & Collender.
1855 — February, Plays a three-carom match with Monsier Damon, a French expert, for a stakes of $1,000; he opens a room at 39 Chambers Street, New York.
1856 — Phelan’s book Game of Billiards is published; he opens a room at the corner of Broadway and 10th, New York. It was considered the finest and most luxurious pool room in the world. He also publishes the first edition of Billiard Cue, the first billiard periodical.
1858 — Phelan defeats Ralph Benjamin of Philadelphia for $1,000. This is the first recorded billiard match in American history.
1859 — Enters into a high stakes challenge match with John Seereiter  In today’s dollars, the stakes would be valued at more than $400,000. 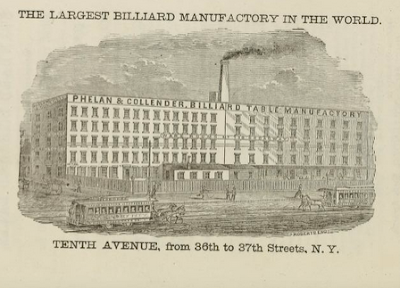 1860 —Buys Tobias C. O’Conner’s share of billiard table manufacturing business, O’Conner Collender.
1863 — Phelan retires from active competition. He also offers a $10,000 reward for anyone who can come up with a suitable ivory substitute for the manufacturer of billiard balls. This effort has been credited with the eventual development of plastic.
1865 — Phelan was a founder of the American Billiard Players Association, which was open to professional players, poolroom proprietors and amateurs. Controversially, he brings a large segment of the sport under his control.
1870 — Saves his grandson from drowning during International Yacht Race.
1871 (Oct. 7) — Dies, presumably from the lingering effects of exposure from helping saving his grandson the previous year.
1993 — Inducted into the Billiard Congress of America Hall of Fame.