Mosconi Records in National Archives: What’s in his case?

Consider exhibit A, above. It’s a handwritten note in which someone has enumerated 13 pool shots, each of which has been described with just a few words. The unnamed author uses cursive letters that slant off to the right. It also looks like he took his time writing it because the script is deliberate. Almost tidy. And judging from the crease marks, one can assume the note was at one time folded into at least three sections. This tells me that the unnamed author must have been carrying the note around with him.
Why are we examining this note? Because at one time it may have resided in the pool case of one William Joseph Mosconi, the 15-time world champion. I recently found it in the Archives Center of the  National Museum of American History in Washington.
Many consider Mosconi to be the greatest player of all time. He was born in 1913, went on to win numerous world championships, was inducted into the Billiard Congress Hall of Fame, hobnobbed with the rich and famous.  This yellowed note, pictured above, was written by Mosconi sometime in the 1960s. It includes a description  of the “Paul Newman” shot, an apparent reference to the shot the actor employed in The Hustler. Mosconi, as you may recall, was a technical adviser for the film and, according to information on the Archive’s website, these notes relate to shots employed in the movie. That could be. But it also could spell out Willie’s exhibition trick shot routine, which doubtlessly also included the Paul Newman shot. 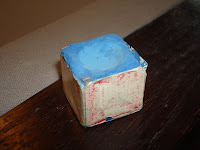 The Archives Center also possesses other objects that Willie doubtlessly carried in his case. I don’t have images of them here, but there are business cards and letters. The archives also possess several items that wouldn’t fit in Willie’s case, including scrapbooks, legal records, videos of Mosconi’s appearance on the Ed Sullivan show and the affidavit attesting to his famous 526-ball straight pool run.

Now consider exhibit B, the simple piece of chalk pictured just above. Although you can’t tell it from this photo, this piece of chalk once rested on the rail of Willie Mosconi’s pool table in the basement of his Haddon Heights home. Flora Mosconi, Willie’s widow, gave it to me some years back.  The piece of chalk is not autographed or otherwise marked to signal its famous origins. But I know the truth. It looks well worn. But was it ever in Willie’s case? You be the judge.