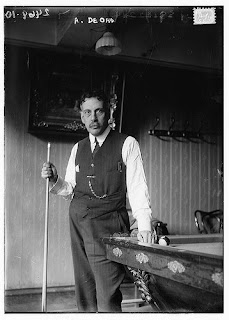 If you’ve been following along lately, you know we’ve had on-gain off-again discussions here about the greatest pool players in American history. Several months ago we conducted a poll on the issue.  Willie Mosconi and Ralph Greenleaf received the most votes, which prompted a run-off. The voting is still open on the question. You can find the ballot on the panel at right.

But throughout this discussion there’s been one important player who almost entirely escaped notice. That player is Alfredo de Oro, pictured at right. De Oro is largely forgotten these days, probably because his spectacular career occurred before living memory and because his exploits were overshadowed by the very colorful Ralph Greenleaf, who followed close on his heels. But de Oro was among the first inductees into the Billiard Congress Hall of Fame. He also mounted a championship career that would rival that of Greenleaf or any of the other lions.

De Oro was born in Manzanilla, Cuba on April 28, 1863. That’s a copy of his passport above. (It’s incredible what you can find online.) According to a quick bio I found on Wikipdedia, de Oro’s first public appearance as a professional was in the fourth US National Fifteen-ball Championship, held in New York, February, 1887. By my calculation, he would have been 23 years old. He died in 1948, two years before Ralph Greenleaf’s death.