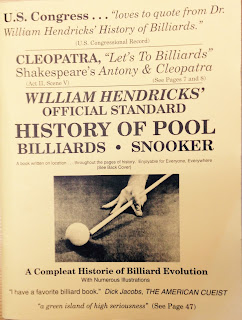 Here’s a bit of sad news for pool history fans: William Hendricks, author of the very good but somewhat obscure Official Standard History of Pool, Billiards and Snooker, has died.

The Official Standard History of Pool, Billiards & Snooker is a hard-to-find gem, one that includes fascinating tidbits about the early history of billiards equipment and the game. A timeline in the book
goes all the way back to 1164, and cites the earliest documented use of the word “bille” to refer to certain medieval ball games.

According to an online obituary, Hendricks was born on Sept. 16, 1923 in Alton, Illinois. He served in Europe during World War II and later became a professor at Southwestern Illinois University-Edwardsville and Belleville Area College. He also was an avid pool player.

Although never in wide circulation, Hendricks’ book has been cited in many other works, including those by billiards historian Mike Shamos (The
Illustrated Encyclopedia of Billiards) and John Grissim (Billiards). I also cite Hendricks in The Hustler & The Champ.